11th May, 2016
FOR IMMEDIATE RELEASE
"Almost The Marrying Kind"
Worldwide 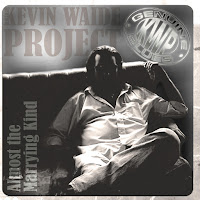 The Kevin Waide Project is proud to announce the release of "Almost The Marrying Kind" Friday, June 24, 2016.
Recorded and produced by Kevin at K-Dub Studio in Aberdeen, Mississippi, "Almost The Marrying Kind" anchors itself deeply in the Blues of his home while mixing in generous helpings of Funk, Jazz, and Country music. The funk influence is apparent as the album starts and it goes on to visit the Mississippi Hill Country and Nashville, ending with a trip in church.
According to Kevin: “This album is a little different from the last two. I’ve been listening to a lot of Singer/Songwriter stuff lately, and it worked its way into the songs. I have always loved playing funk, and I just decided to let it shine this time around. I’ve been calling it ‘Country Funkin’ Blues!’”
Pre-order phase for "Almost The Marrying Kind" will begin Tuesday, May 24, 2016, at www.kevinwaide.com and will run through midnight Thursday, June 23, 2016.
Friday, June 24, 2016, "Almost The Marrying Kind" will be available for purchase worldwide through the usual outlets (iTunes, Google Play, Spotify, Amazon, and direct from www.kevinwaide.com).
The Kevin Waide Project is the brainchild of Kevin Waide and Chris Fooshee and will celebrate 10 years of "preachin' the blues" in March, 2017.